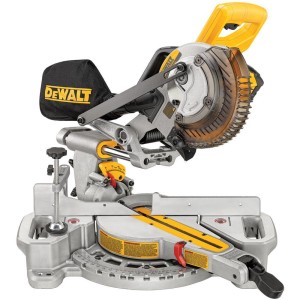 I had heard about DeWALT coming out with a new cordless 20V miter saw for over a year now and just when I thought it was merely a rumor, guess what shows up on the Home Depot website? The new DeWALT 20V miter saw DCS361M1 . While this isn’t the first cordless miter saw to come out as Craftsman, Ryobi, and even competing brands such as Makita and Milwaukee (in the UK) have them as part of their current 18V lines, it is a first for DeWALT’s 20V Max line.

Tool Craze is an Amazon Associate and places paid links including those from other retailers that Tool Craze is an affiliate partner with. If you purchase something through a link on the Tool Craze site, Tool Craze may get a small share of the sale.

These cordless saws are great as you can run them in areas without power and what I like about them is they’re much lighter and you don’t have to hassle with plugging them in or deal with power cords even if the jobsite does have working power.

Specifications are scarce at the moment as the only details on the new miter saw are only on the HD website and even then they don’t give you the full picture. What I can tell you is that it runs a 7-1/4″ blade- regular blades found on circular saws- instead of a 10″ or even 12″. It would require more power to run larger blades since they offer larger cutting capacities but 7-1/4″ should be plenty for cordless needs where portability is a higher priority than top performance. Since it’s a smaller blade you don’t get much vertical cutting capacity as it maxes out at 3-1/2″ and 3-5/8″ for nested crown molding but this saw offers plenty in terms of horizontal cutting capacity for easy cutting up to 2×8″ material as its a sliding saw. The saw has 10 miter bevel detents and it seems to be a single bevel saw. Specs say it has an integrated XPS cross cut positioning system provides adjustment free cut line indication for better accuracy and visibility. I believe this is their famous LED lighting system that casts a thin shadow precisely where the cutting line is and works better than lasers. 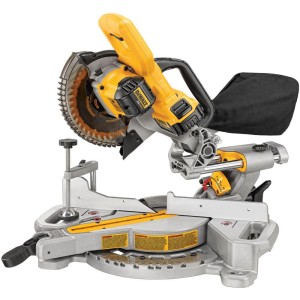 It weighs in at a light 30 lbs and is said to get up to 150 cuts on 2×6 lumber which is impressive if true. It doesn’t say what battery is required for the up to 150 cuts claim. In the pictures it’s shown with an XR 4.0ah battery although the description states a 3.0ah battery is included. We’ll have to stay tuned for the official info from the manufacturer themselves.

Now onto the sweet part, it’s priced at $399. Now, if this was for the saw only (baretool) that would be a great deal as Makita’s 18V miter saw is priced just under $600- and that’s only for the saw itself. You’re going to have to shell out more cash if you want the complete kit. But this DeWALT miter saw comes as a complete kit with battery and charger for $399. This might be a Home Depot exclusive as was the case with the DCS387 compact 20V recip saw where HD got a lower priced kit than everyone else but included a smaller but yet still high capacity battery (3.0ah) and DeWALT’s budget charger, as a single DCB200 3.0ah battery and the DeWALT budget charger DCB112 is included with the miter saw kit. The DCB112 charger is the best DeWALT budget charger but still lags behind charging speed and features when compared to the mainstream DCB101.

Included with the saw are a carbide 7-1/4″ blade, a single 3.0ah battery, charger, manual, and a material clamp. It’s nice to see a material clamp is included as DeWALT usually leaves these out in their miter saws although no extensions are included. We’re still waiting for other specifications such as the no-load RPM but my guess is that it should be around 2,200 – 2,700 RPM as that is where the competition from Makita and Milwaukee stand. This isn’t the high RPM we’re accustomed to in cordless circular saws but my guess is that the lower RPM is geared towards higher torque that is required for cutting 2x lumber. 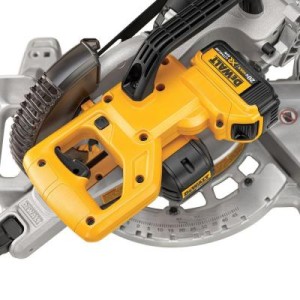 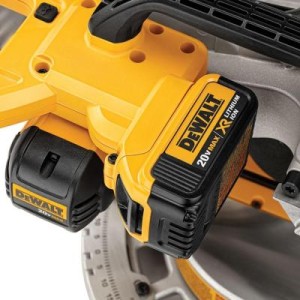