In this review I will be checking out the Dewalt DXAM-2260 600 CFM Air Mover utility blower fan and I will provide my honest review.

Alton Industries was kind enough to provide the Dewalt DXAM-2260 600 CFM Air Mover at no cost for review. However as with all my reviews, I am not paid, sponsored, or obligated to give a positive review. This review is my opinion of the product based on my usage and knowledge and my review will reflect what I like and dislike about the product. I will do my best to provide you with an unbiased review.

The Dewalt DXAM-2260 600 CFM Air Mover does exactly what it’s name states, it moves air and shares the same design as other similar products on the market that go by the name carpet/floor dryer, fan blowers, utility blowers. They all push a lot of volume of air for the purpose of drying out wet floors and can be particularly useful when painting and doing drywall work so as to dry either much quicker than letting them dry on their own. They are also good for circulating air in or out of a room and like any fan are good for cooling you off as you work. 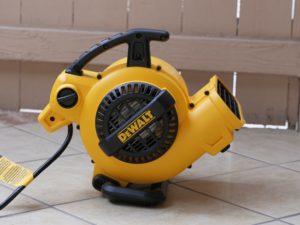 Dewalt’s utility blower has some interesting features built into the tool such as a special bracket that allows it to not only lay flat to blow straight but it can also sit at a 90 degree angle and also face straight up. It also has two on-board power outlets so you can plug two other tools into this one. There’s also a circuit breaker switch near the outlets. The power cord is very thick letting us know it uses large gauge wiring to handle not just the blower but two other tools plugged in although keep in mind it’s only rated to handle up to 10 amps max. The power cord is 10 feet long which is long enough that you probably won’t need to use extension cords for the average sized room. There’s also a top handle to easily carry the tool and it also doubles as a cord wrap. The special bracket stand at the bottom can also be used as a handle if needed. 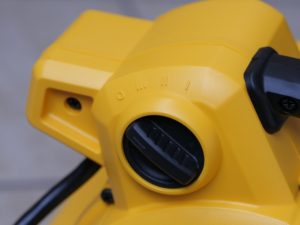 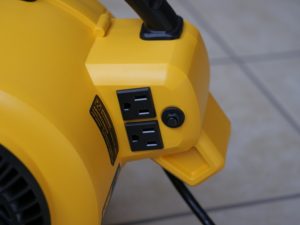 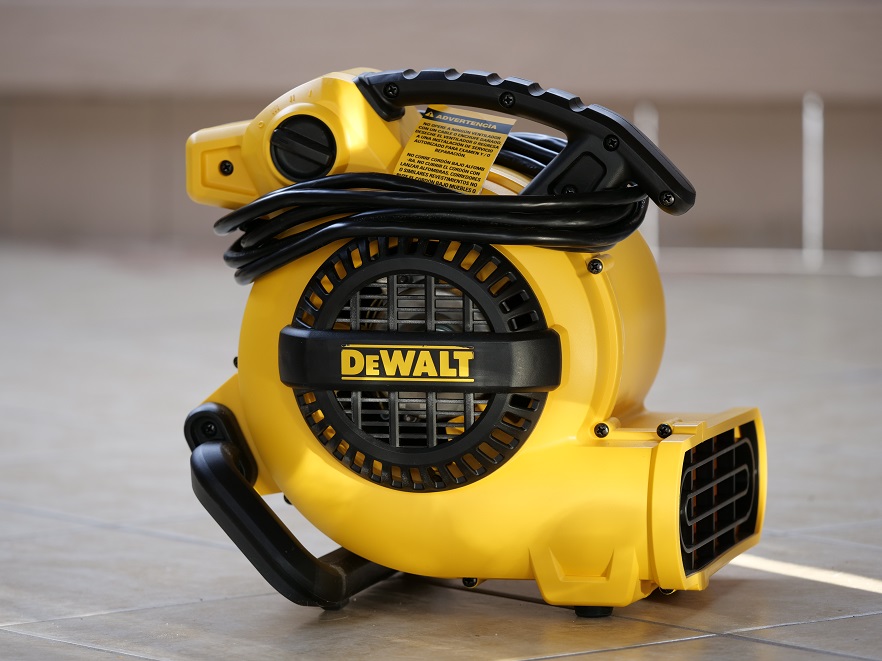 At max power the Dewalt air mover pushes out 600 CFM’s but you also have a 3 speed switch for low, medium and high speeds. It performs very well considering how small the unit is and I liked that the air that’s pushed out isn’t concentrated and widens out the further it goes so as to cover more area. 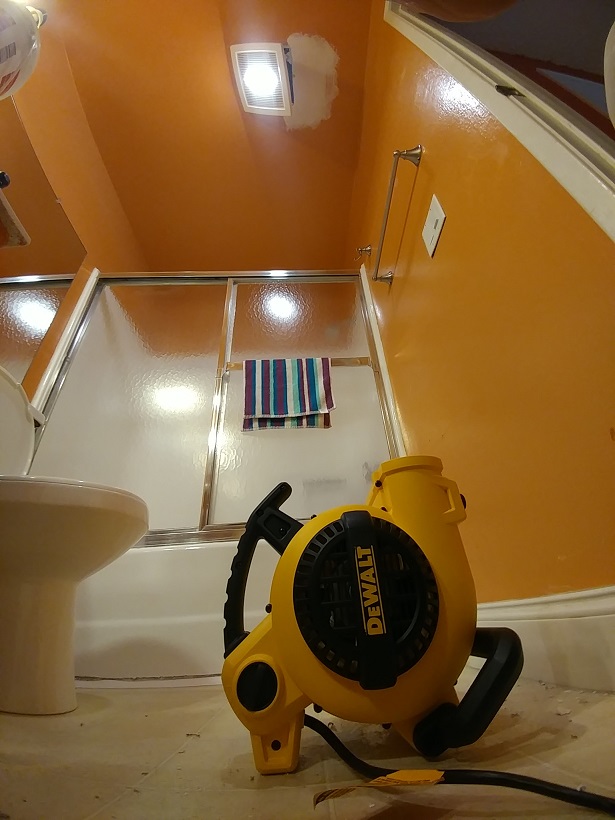 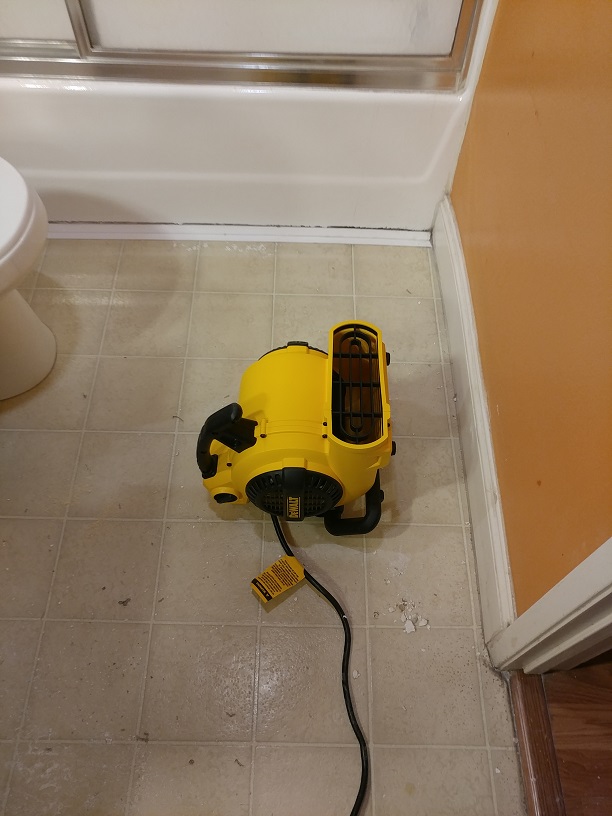 I was able to use it earlier this week where I had to do some drywall patchwork on a bathroom ceiling and used the blower to dry out the drywall mud faster than by leaving it alone to dry by itself. I also painted the ceiling of the bathroom right after and in both instances was made easy because the Dewalt air mover is able to direct airflow directly up. I appreciated that the air moved spreads out the further it goes and thus was able to circulate air over the entire ceiling area of the small bathroom to dry the paint much faster. We also used the Dewalt blower to dry additional painting around that house including the walls and trim. 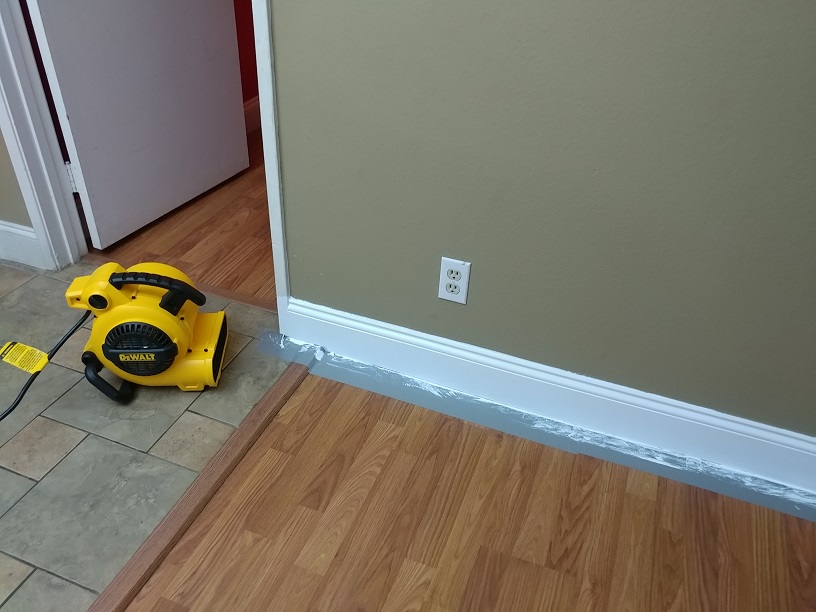 Prior to testing out the Dewalt air mover, we used a large stainless steel fan when remodeling and while it does push out more air than this Dewalt, it’s also much louder, by a lot! That’s what I also like about this Dewalt Blower is that it’s much quiter than my stainless steel behemoth at 66 decibels loudness on high, 62 db at medium speed and 58 db at low speed all measured by my decibel meter at exactly 5 feet away. It’s quiet enough at these volumes that you can still carry on a conversation with others in the room and be able to listen to the radio while this air mover is operating. That’s something I can’t say about my large stainless steel fan.

Also interesting to note is the build quality of this Dewalt unit. It appears to be made to the same exact specifications as any of their other Dewalt power tools with solid ABS plastic housing and beefy roll cage design-like handle and base (also known as it’s special bracket). This a sharp contrast to other blowers on the market that use cheaper blow molded plastic housing throughout. I expect this air mover to take and survive the same kind of abuse my other Dewalt tools have received and still keep on working years later.