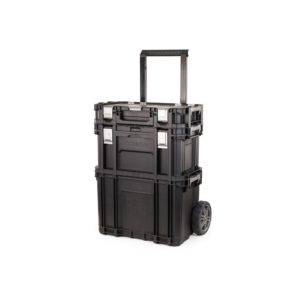 Just like the Ridgid 22 pro tool system, it has 3 separate components with a large tool box at the bottom with built in wheels and telescoping handle, a medium sized tool box, and a small tool box organizer at top. All are stackable and can attach to the unit below it.

The main selling point for the Husky is that all 3 pieces are sold together for a much cheaper package than buying Ridgid’s set separately. The Husky set is only $79.97 while Ridgid’s set would add up to around $130.

The main downside to Husky’s set I can find is that the rolling tool chest (the large bottom tool box) doesn’t appear to have a separate lid of it’s own. According to the pictures, it appears that the medium tool box is the lid to the large bottom tool box so the only way to close the bottom box is to attach the medium box above it. Both the medium and small organizer boxes have their own lids so no worries there. The other downside I find is that it comes only as a package and not everyone may need the complete set.

Form, function, quality, and design seem to be similar to Ridgid’s set but at a lower price point than buying Ridgid’s complete set, so it may be an appealing alternative to buyers looking at Ridgid’s 22 pro tool box. 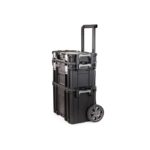 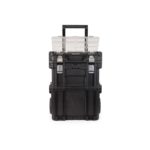 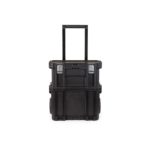 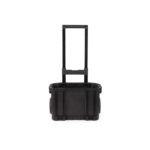