In previous years, we’ve seen leaked images of Makita 40V batteries with the XGT naming, and we were wondering when Makita would officially announce them here in the USA. I understand that the date of this article is April 1st, however this is no joke. Makita has officially announced their new cordless power tool line under the XGT name which is similar to how Makita labels their current 18V and 12V lines as LXT and CXT respectively. And at the heart of the new XGT cordless line is the new XGT 40V max (actual 36 Volts) and it powers a new line of 40V and 80V (actual 72 volts). This new line will allow Makita to produce larger and more powerful tools and larger capacity batteries as well as supporting new power tools that are similar 36V tools in size but are able to be lighter and less bulkier due to only needing one battery rather than two batteries like those found on their X2 LXT tools. And under this same new line, they will also offer 40V power tools that rival the size and weight of current 18V tools so that this one system can have it all.

Full disclosure: This is not a review, this is tool news. Tool Craze cannot guarantee the accuracy of the information/specifications/features of any tool listed in this article. Manufacturer marketing claims may not always meet expectations. Tool Craze is not responsible if products do not live up to claimed expectations. Please do your full research before buying any products. Tool Craze is an Amazon Associate, and also an affiliate with the Home Depot, Acme Tools, Ohio Power Tool, Lowe’s, Ebay, and Walmart and places paid links to these retailers. If you purchase something through a link on the Tool Craze site, Tool Craze may get a small share of the sale. 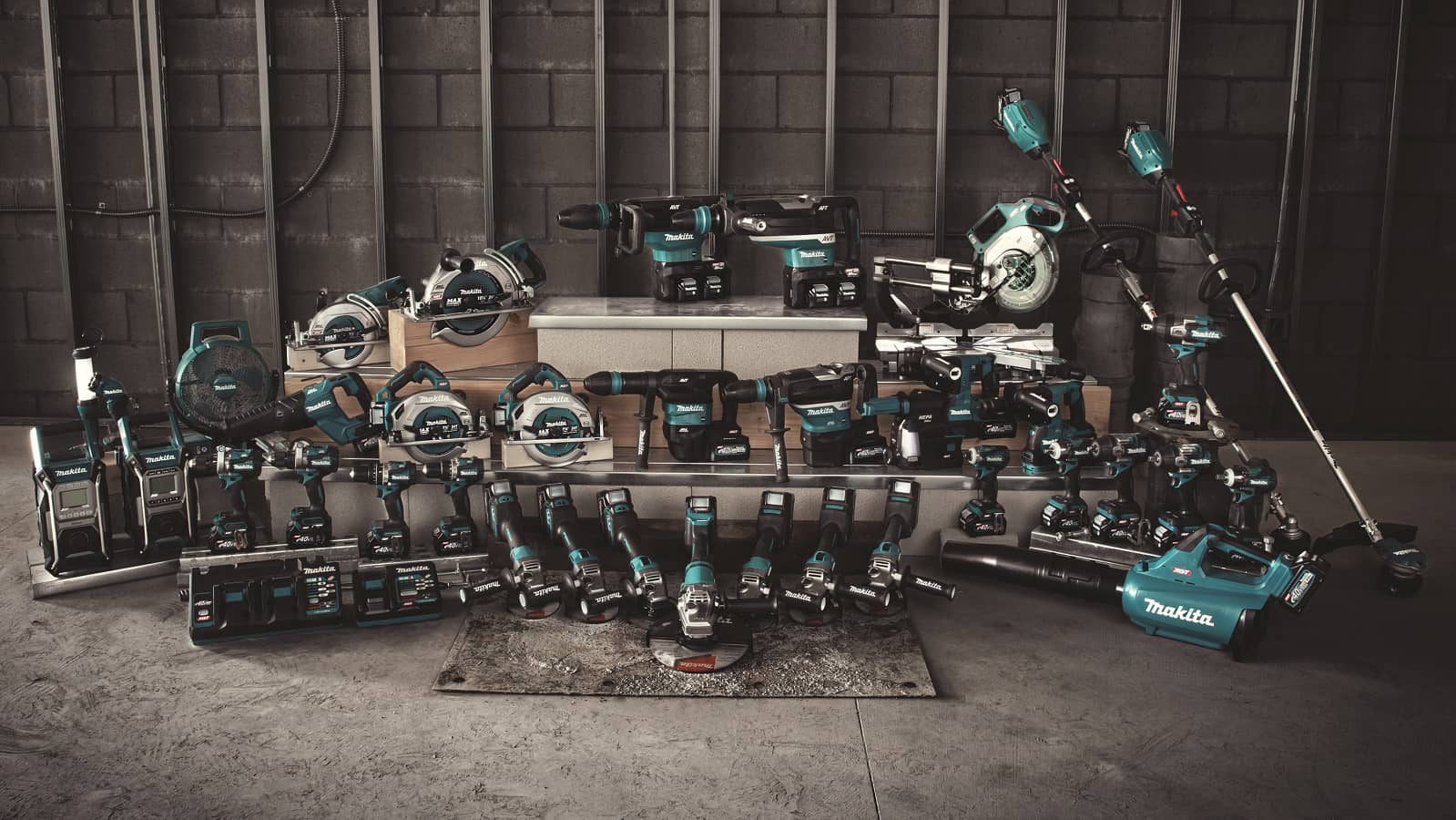 When I first learned of the new Makita XGT 40V max batteries, I scratched my head and asked why? They already have an excellent 18V LXT system that also has X2 power tools that use two 18V batteries to provide 36 volts for when higher than 18V performance is needed. So it didn’t make much sense to me why Makita would start a new 40V cordless power tool system. According to Makita, their reason for starting a new 40V power tool system is because they say that X2 is at its max. They mentioned how Dewalt is running two battery systems and has a 20V and Flexvolt 60V system with the problem of the 20V battery not being compatible with their 60V tools. They also mentioned Milwaukee as having both an 18V system and the MX Fuel system which features what Makita calls a “car battery” ?. They said that 2 battery platforms is unacceptable for them. However technically, having both an LXT (18V) and XGT (40V/80V) lines running side by side, they are in fact running 2 battery platforms. Actually Makita is now running 3 cordless power tool platforms if you also count their 12V CXT line. I feel that they (Makita) believe that the XGT line will offer the versatility of what other brands offer in 2 separate lines but streamlined into one line. For example, you’ll still find your standard compact and premium drills, hammer drills, impact drivers and impact wrenches that you’d normally find in any cordless 18V line also available in Makita’s XGT lineup however now as 40V tools that have similar size, and weight and performance as their 18V brothers. Some are even said to offer a wee bit more performance (when compared to Yellow and Red’s similar 18V offerings). 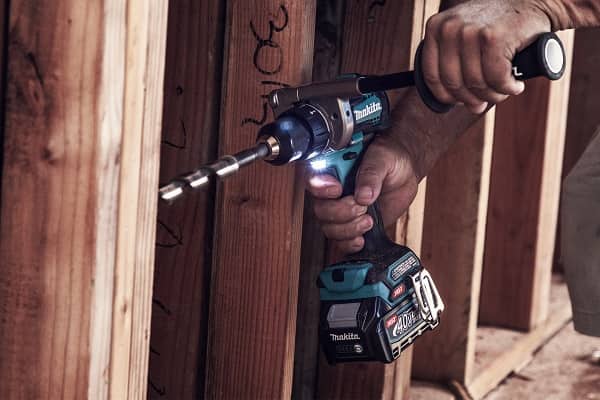 One of the main benefits of Makita’s XGT line is that they can now offer tools similar to their X2 (36V) tools but with only one battery pack instead of two. This cuts down on bulk and weight as well.

Makita XGT also offers their own flavor of X2 tools. These are known as the XGT  80V Max power tools which also have the X2 naming. And that’s because they use two XGT 40V Max batteries together to pump out 80 volts max (72 actual volts). This enables Makita to make tools more powerful than what’s currently available on the LXT X2 system. They say we can expect larger tools like a 2″ SDS Max rotary hammer and 28 lbs demo hammer running on XGT 80V Max! We can also expect interesting power tools like a new 1-1/8″ rotary hammer, 1-9/16″ rotary hammer, 15 lbs demo hammer, and a 10-1/4″ circular saw as part of the 40V side of things. We can also expect new XGT power tools similar to current LXT 18V and X2 power tools like angle grinders in 4-1/2″/5″/6″/7″/9″ sizes and regular and rear handle 7-1/4″ circular saws. 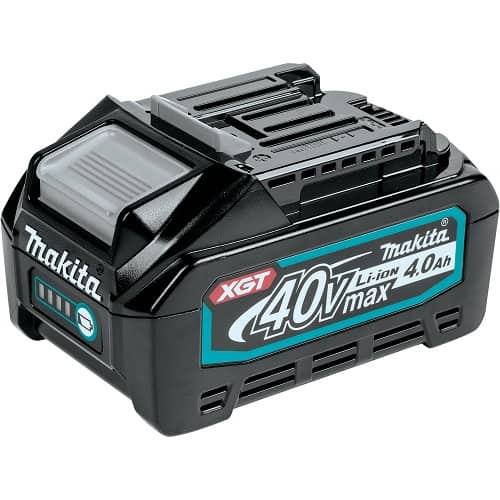 The heart of the system is no doubt the XGT 40V batteries. They come in medium, large, and X-large sizes 2.5ah, 4.0ah, and 5.0ah respectively. You wont see compact batteries because their smallest pack contains 10 cells, so even the most compact of XGT tools like drills and impact drivers theoretically cannot have a total weight and size as light and compact as an 18V tool with a compact 5 celled battery. I haven’t seen any side by side size comparisons of XGT with 18V batteries however they do say that the 2.5ah XGT battery is similar in weight to an LXT 5.0ah battery which makes me believe the 2.5ah XGT battery could be closest in size to the LXT 5.0 battery. The XGT 4.0ah battery is a little larger than the 2.5ah, with the XGT 5.0ah battery BL4050F being larger than 4.0. When all three are put side by side, the 5.0ah XGT looks similar in size to a 15 cell battery, maybe a little shorter. Makita has confirmed that the new XGT batteries are using 18650 and also depending on the battery are also using 21700 cells which pack larger capacities. 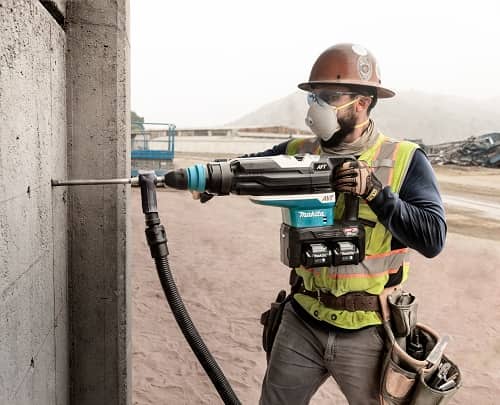 Makita also said that concrete and metal working are two categories they deem that would benefit from XGT and as mentioned above, are already heavily invested in out of the gate. They also say that XGT opens up the opportunity for light equipment which is a category largely dominated by gas, pneumatic, and plug in electric with little to no cordless battery powered options. So far, Milwaukee has been one of the first brands to enter into this field with cordless battery powered tools with their MX Fuel system. Makita looks to get into this portion of the market as well with their XGT system.

Makita also highly regarded their XGT system, putting emphasis on the durability of the components. With durable outer casing and cell holder of their XGT batteries, and with the new XGT tools using high rigidity battery rails.

What about battery charge times? The BL4025 2.5ah battery has a 28 minute minimum charge to 100% and 19 minutes to a 80% charge, BL4040 4.0ah 45min charge to 100%, 31min 80% charge. The main charger is a fast charger model DC40RA that has two fans, one to cool the battery and the other fan to cool the charger circuitry. They also have a double charger as well that can charge two XGT batteries simultaneously.

What about the LXT 18V System?

Makita did say themselves that 2 platforms were unacceptable for them, so does that mean that this is the end of their large and popular 18V LXT system? No, for they will in fact be running two cordless lines at the same time (three including CXT) as they said that the XGT system is not replacing the LXT 18V lineup.

Are the LXT and XGT systems cross compatible? No and yes, but mostly no. The two systems are not cross compatible. The only exception to this rule however, is that the new XGT charger can accept and charge LXT 18V batteries but only with an optional adaptor.

Makita is very proud of their new cordless system and they say that we can expect 50+ products many of which are 40V while some are X2 80V. They say that Makita XGT will launch in mid April so expect them to hit stores soon.